Comparison of Sync2Folders Pro to BASK

It wouldn't make sense to compare Sync2Folders Pro to Beyond Compare or other mature, well established programs with similar functionality. This is true for a number of reasons, including:

What I will compare it to is BASK. BASK is a synchronization utility I wrote in the early 2000s that is still in use today. Not by me, but there are a few users out there that still faithfully use BASK.


BASK was written at a time when hard disk drives were small and expensive, and the floppy disk, ZIP disks, and CD-Rs ruled! It was a time when all backups were made to such media, and since those disks filled up quickly, you had to use a whole bunch of them to back up your HDD, or to store all those MP3s, JPGs, and other media files!


BASK handled spanning multiple discs and that was one of its main focuses. Since this is not something we worry about that much today, I'll not spend much time on the subject except to mention it as needed. Suffice it to say, I was preoccupied with how to copy files from CD-Rs and ZIP disks to my HDD at the time.


What I will focus on is the similarities between BASK and Sync2Folders Pro, and if Sync2Folders Pro is better at performing tasks both utilities were written to do. I know for a fact that BASK's code base was difficult to manage. Fixing bugs and adding features was hard to do because the code base was kind of a mess.


BASK let you choose from various scan methods, supply multiple source folders, each with its own file spec to include as well as to exclude, the option to exclude sub-folders, and you could assign each file set an operation. Note that BASK's operations are very similar to Sync2Folders Pro's sync methods. BASK also has automatic operations, which means it can periodically execute a file operation for the specified file set(s).

An interesting point is a BASK file set can have multiple source folders whereas a Sync2Folders Pro profile only has a single. It's another way that BASK caters to power users who want to use it backup their files,whereas Sync2Folders Pro knows it's a simpler synchronization utility. This along with the disk spanning features, automatic operations, and some of the other file set properties and options shows how different the two utilities are in some ways.

While Sync2Folders Pro doesn't offer all of these options in its profiles, it does offer four ways to exclude files:

And since regular expressions can exclude by folder path or filenames, it's very powerful.


Number 1 is the same as what Sync2Folders Pro offers: A comparison of the modified date/time of the source and destination files.

Number 2 adds size, which is useful to know but only if you know WHY the sizes are different. I argue that most of the time it's more important to know which file is newer (was modified most recently).

Number 3 uses the archive attribute of the source file to determine if it needs to be copied (backed up) or not. I'm not sure if this is a reliable way to determine a file has changed, and even if it is, it's more useful for a backup program than one focused on synchronizing files.

Number 4 uses an arbitrary date as a way to determine if a file should be copied or not. I don't remember why I added that scan method, but I don't see a use for it.

BASK has numerous operations available, and operations are similar to Sync2Folders Pro's sync methods. Some of these operations have to deal with concepts like a file that is "changed", which means the files don't match because of file size, for example. Sync2Folders doesn't offer multiple scan methods like BASK does, though, so its files can only be New, Newer, Older, Missing, or Matching. That's it!

Sync2Folders Pro has sync methods, which are customizable and pretty easy to understand. When you define a sync method, you make a decision for each comparison status by choosing a file operation to associate with it. Since you can edit and create your own sync methods, you get to decide how many to have, what their names are, etc. 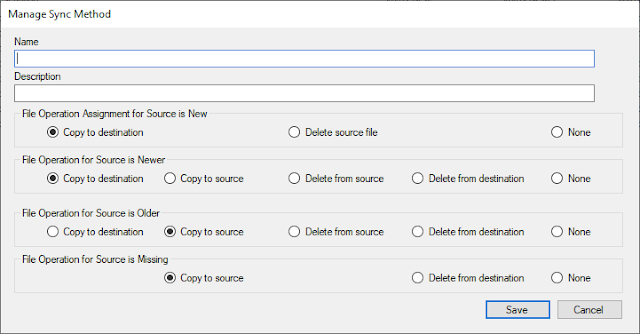 
One area where BASK exceeds Sync2Folders Pro is in how many settings there is in its Options dialog! BASK has a whole bunch of options, some specifically having to do with spanned sets of disks, others with its tray menu item, but there's also options for logging, automatic operations, and it can even execute commands when it succeeds or fails!

I don't see most of these as important. Some might be worth adding to Sync2Folders Pro at a future date, but for the most part, the options in BASK are overkill. It is an impressive set of options, but I don't think what's on offer is always meaningful.

It's very easy to toggle compact mode on and off, though, which means you can easily and quickly display the file comparison list if it's not present just by pressing Ctrl-Shift-C. This is much simpler than what BASK offers.

BASK's file comparison list is pretty basic. It shows the source filename with path, the modified date and time, the file size, and the status. You can select files and choose to Backup (copy to destination), Restore (copy from destination to source), and you can Delete Source, Delete Destination, or Delete Both. These options are similar to Sync2Folders Pro's file operations.

This has been a quick comparison of two similar products, although one is from a different time in the history of computers. BASK was made as a backup/synchronization hybrid, with a focus on spanning multiple disks/discs and with options focused on the power user. Sync2Folders Pro is a modern application, one that was made with the knowledge that few people keep their content on floppies, ZIP disks, and CD-Rs nowadays.

Nowadays it's all about copying files to folders synced to the cloud or that reside on Network Attached Storage (NAS). We no longer feed multiple floppies into drives in order to copy files to our HDDs. Also, we now have multiple hard disk drives, some that are SSDs, and they often hold 8TB or more.

Sync2Folders Pro was built for today's computer usage. It may not compete with Beyond Compare, which in my mind is still the gold standard of comparison/synchronization utilities, but for my money it beats BASK.

Sync2Folders Pro is coming soon to the Microsoft Store.

Gary A. Lucero
I am a software programmer and tester. I've written many Shareware and Freeware programs, test applications, drivers, and release code, first in C++ using MFC and the Win32 APIs (back in the 90's) and more recently in C#.