Sync2Folders Pro Version 1.25 is now available from the Microsoft Store. Please note that an update has just been submitted as well, and should be available in a day or two. It displays as Version 1.26 in the About box. This update has a minor change that only has to do with how the options settings are upgraded from one version of the app to another.

I wanted to provide an update on Sync2Folders Pro Version 1.25. I've completed updates to the online help file, which is live, and I've submitted the app to the Microsoft Store. I completed final testing and although I found a few small issues, they were minor and have been fixed.

Now that I've submitted Sync2Folders Pro to the Microsoft Store, I'll complete testing on Sync2FoldersCmd Version 1.25. It has its own specific requirements because I've added ad hoc command-line options (meaning it can work without requiring any files from Sync2Folders Pro), which require specialized testing that doesn't necessarily have anything to do with file synchronization.

Development is nearly complete on Sync2Folders Pro Version 1.25 and it will be submitted to the Microsoft Store  soon.  This releases major feature is Move. By "move" I mean two new file operations:

These are exposed in the Manage Sync Method form as "Move to destination" and "Move to source": 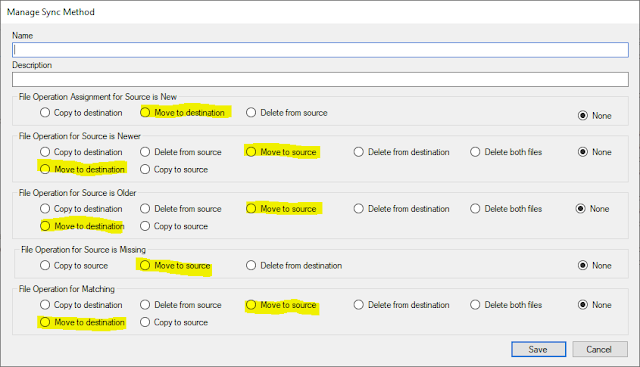 Sync2FoldersCmd will of course be updated to support these new sync methods.

Additionally Sync2FoldersCmd is getting an ad hoc command-line mode.Ad hoc mode doesn’t require Sync2Folders Pro files at all. All profile settings and options can be passed on the command-line.

Popular posts from this blog

November 20, 2019
The content you are looking for has moved. You will be redirected to its new location in 5 seconds. If redirection fails, please follow this link.

July 05, 2019
MaxLeafSoft and its applications never store your personal data.

Comparison of Sync2Folders Pro to BASK

November 26, 2019
It wouldn't make sense to compare Sync2Folders Pro to Beyond Compare or other mature, well established programs with similar functionality. This is true for a number of reasons, including:
Sync2Folders Pro doesn't offer a way to compare file contents or to copy contents line-by-line from one file to another.Sync2Folders Pro isn't backed by a team that has programmers as skilled as those at Scooter Software and elsewhere. I am capable, but this isn't my main job, and as such, I'm not as good as they are!Sync2Folders Pro is free. There are other free utilities that are probably more robust, but that's not the point. The point is, I'm not going to compare this program to the competition because there is no competition here. I wrote Sync2Folders Pro for myself, and the only utilities I'll compare it to are those I also wrote. I could compare it to Sync2Folders Lite, but it surpasses that program handily. Sync2Folders Pro has an entirely new code base, and ha…
Post a Comment
Read more

Gary A. Lucero
I am a software programmer and tester. I've written many Shareware and Freeware programs, test applications, API level test drivers, and release code, first in C++ using MFC and the Win32 APIs (back in the 90's), Java, and more recently in C#.